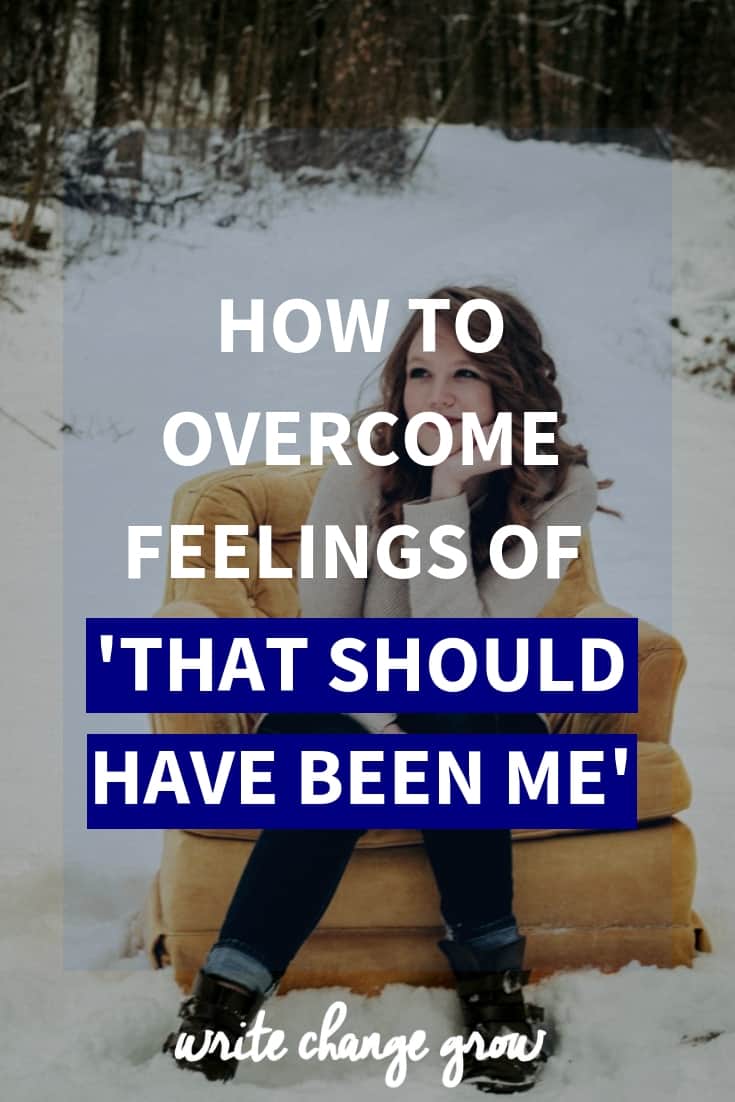 I have a question for you – have you ever gone down the ‘that should have been me’ road.

Whether it was caused by a colleague who got a promotion that you think should have been yours, someone going on amazing travel adventures that you want to take or an ex who moved onto love, marriage, and kids with someone else, while you stayed single.

Even worse, it might have been the partner who said they didn’t believe in marriage, getting….you guessed it….married in record time after breaking up with you!

I can totally relate to this one. Years ago it was a common occurrence in my life. You don’t want to know how many of my ex’s went on to marry the love of their life straight after dating me. At one point, it became a running joke with my best friend that if a guy didn’t want to go out with me, he’d missed his big opportunity at love because now he wasn’t going to meet the girl after me!

Here are my tips on overcoming the feeling of ‘that should have been me!’

Generally, there will be triggers that spark off a ‘that should have been me’ episode.

It goes without saying that ex-partners can be a trigger. For this reason alone, I suggest you stay away from following ex’s on social media because seriously you don’t need the aggravation!

Don’t even think about going down the let’s be friends track without knowing you can absolutely handle it.

Know your triggers and avoid them where possible. Don’t go looking for trouble. Trouble sometimes has a way of finding us all by itself, so let’s not help it along!

While we can all be prone to the occasional ‘that should have been me’ thought, most of the time these feelings are rare and fleeting which is exactly how we want them.

If these feelings hang around, it’s time to dig a little deeper.

Firstly you need to start monitoring your self-talk to see how often these feelings are occurring and why (it might turn out your triggers are not what you expected). Then it’s time to start using positive language to counteract your negative feelings.  When you have a negative ‘that should have been me’ thought you need something powerful to shut it down with.

Sometimes taking action is the best approach.  Since travel is one of my passions, I had a ‘that should have been me’ feeling when one of my ex’s was gallivanting around traveling and I was going nowhere.  I booked a fantastic overseas trip I had been planning for a while and the feeling instantly went away.

Get honest about what you want

Sometimes this feeling can be triggered by something that isn’t part of our past at all. It’s about how we want our future to look.

You are single and your best friend meets a wonderful man and you get the ‘that should have been me’ feeling, even though you have no romantic interest in your friends fellow at all.

Maybe you need to widen your social circle. If you are using Internet dating (which let’s face it, is now the norm) it might mean you need to be more discerning about who you date. As you can imagine, there are quite a few scenarios here but the key thing to remember is that you need to work out what you want and go for it.

They didn’t want it with me realization

I’ll be honest, this one stings. It hurts.

But it’s also a hidden blessing in disguise (okay, okay I know it doesn’t feel like one straight up but hear me out).

It’s never fun realizing that we weren’t the one they wanted to marry or have a child with or work with or whatever the original relationship was.

But think of it this way, you probably dodged a bullet.

Let’s look at the relationship example. Having a child with someone who doesn’t really want to be with you is probably one of the worst forms of loneliness around. Same goes for being married to the wrong person.

I would take being single over being married to the wrong person any day. Most likely a bad match is going to result in divorce and split custody over the kids down the track. Not a bag of laughs for anyone in that equation.

Whilst I realize you might want to get married and have kids with every inch of your being, more than anything you want to be with the right person (not someone who secretly would rather be somewhere else).


Understand someone might be thinking the same thing about you

We forget about this side of the coin. We forget that people might be looking at us and thinking ‘that should have been me’.

There is another less common reason we might have the ‘that should have been me’ feeling. It might be because we don’t believe in abundance.

It could mean that we believe that there is a finite amount of love, great jobs or even luck out there and if someone else gets more than ‘their fair share’ it means there is less (or even nothing) left for us.

This mindset is untrue. If you are thinking like this you need to open yourself up to opportunity and understand that someone else finding love has no effect on whether you will find love. None whatsoever.

What is more likely to affect your chances at love is that you are repelling people with your limited outlook on life. Work on believing in abundance.

Every moment you fixate on someone else’s life is time that you are not attending to your own.

You don’t want to spend time fixating on someone else or living in the past, only to wake up and realize a month (or longer) has flown by and you sort of missed it!

You don’t want to miss amazing opportunities that are in your life TODAY because you are fixating on something that didn’t happen yesterday.

Focus on your life as it is now. Focus on making the most of this moment.

If you enjoyed this post, please share it with your friends via the social media buttons provided.

Read Next – 10 Behaviors That Stop You Growing as a Person