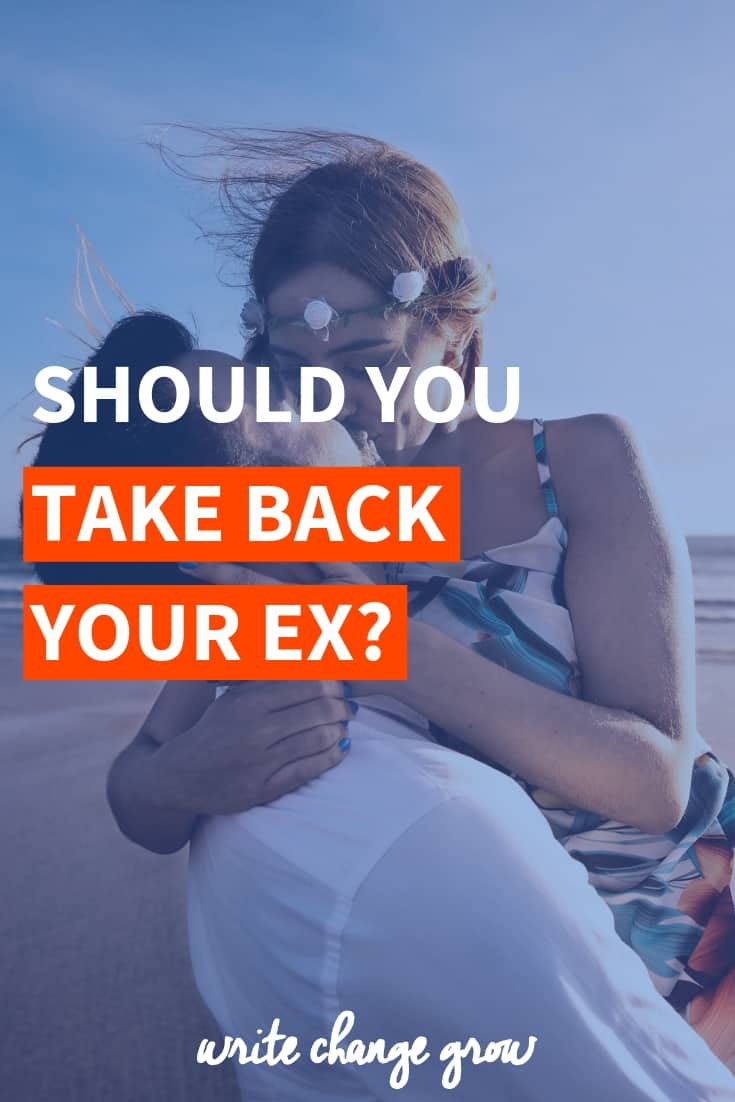 Today’s post is about relationships. The good, the bad and the ugly. More to the point –  when good turns to bad should you take back your ex after things have gotten ugly?

Should you take someone back who has hurt you?

We all know couples that have broken up and gotten back together. Some many times over.

Many of us have experienced this break-up dance ourselves – my hand is way up in the air on this one! Been there done that, got the tee-shirt as they say.

We probably all know at least one couple that has beaten the odds and naturally we want that for ourselves as well. We all like to think we are the exceptions!

If you are thinking about getting back with your ex, it’s time to ask yourself some serious questions.

Why did you break up in the first place?

It’s the reason we break up that makes all the difference.

Perhaps you had a minor disagreement, perhaps it was a timing issue. Maybe they weren’t over their ex. Perhaps you broke up over infidelity or money problems.

I’ve taken back a cheater only to have him cheat on me again. He was a serial cheater so it was a stupid move on my part. I was young, insecure and what I thought was ‘madly in love’. The interesting thing is I can barely remember the guy now!

Each couple has their own story. Whatever your reason for breaking up it needs to be something you can both work on and move past which leads to my next point.


Can the damage be repaired?

Are you both prepared to put in the work and time to rebuild your relationship?

Depending on the reason you broke up this could be a considerable amount of work. You have to both be 100% committed to repairing the damage.

One person trying to fix things while the other person isn’t willing to put the effort in, won’t work.


Why do you want to get back together?

This last question is where we often deceive ourselves. We often take people back for all the wrong reasons and guise it under the ‘I love him/her’ banner. Love alone isn’t enough.

Here are some of the reasons we take people back and it goes without saying these should be avoided.

You convince yourself that being with ‘insert name here’ is better than being alone.

Actually, it’s not because you are in for more heartache when you break up again and/or an intensified level of loneliness that comes from having someone sitting next to you yet feeling heartbreakingly alone.

Related post – How to Cope with Feelings of Loneliness

Fear of starting over

You don’t want to start over. I’m not saying this isn’t daunting. As someone who is currently taking a step back from the dating world, it’s scary and intimating to think about starting over.

Fear, however, is not a good reason to take someone back who has already hurt you.

You have low-self esteem and don’t believe in our own worth. It’s never a good reason to be with someone because you think no one else will want you.

Forget about getting back with your ex (forget about being in a relationship at all for that matter) and focus on yourself and building your self-esteem. Learn to love yourself. (You might be thinking that sounds cheesy but seriously it is so important).

Running out of time

You feel like you are running out of time. This doesn’t just apply to women wanting to start a family. I’ve seen men make this mistake too.

You have a goal in mind and a deadline and the ex just happens to be around at the time. It’s a crappy version of musical chairs. It’s also known as settling. You don’t really care for them as much as you should – but hey they’ll do. Hardly sounds like the basis for a lasting relationship, does it?

You don’t want them to be with anyone else

Let’s get real here. No one likes seeing their ex happy and loved up with someone else, particularly straight after a break-up. It hurts a lot, there’s no doubt about that. But if the main reason you are thinking about taking back your ex is that you can’t stand the thought of them with someone else, that’s probably more an ego thing than a happily ever after thing.

Your ego won’t be enough to keep you together in the end, so why put yourself through that? It’s just substituting one pain for another type of pain later on. Let them and yourself move on.

I have taken back 3 partners over the years. Considering my current single status, it doesn’t take a genius to figure out that the ‘breaking up/getting back together’ dance hasn’t worked well for me. Ultimately all of those relationships ended.

Deciding whether to let someone back in your life doesn’t just apply to romantic partners.

In an earlier post, I mentioned that a good friend ended our relationship. The truth of the matter was he ended our friendship back in January 2009 as well.

After careful consideration, I decided to take him back into my life. Jump forward five years and he hurt me again.

Whether I want to admit it, some of that is on me, because I gave him the opportunity. I was the one who let him back in my life. Not a mistake I will be making again.

Healing often requires letting go. As much as it hurts sometimes we just have to cut our losses and move on. Letting people go opens us up to possibilities, growth, and love.